Playable 3D simulation of this   classic handheld electronic game including views of the original packaging and instruction guide
.
A RetroFab simulation
Version 0.9.5 (alpha)

Olive Oil has been captured and Popeye must save her by fighting her kidnapper and knocking him into the ocean.

Brutus has captured Olive and tied her up. You must take control of Popeye and push Brutus back and knock him off the pier. Use the joystick controller to advance towards Brutus and then use the Hit button to land a blow. Land enough blows on Brutus and he'll be knocked backwards. But be careful, it only takes one blow for Brutus to knock Popeye backwards. If Brutus knocks Popeye all the way to the edge of the pier and knocks him off a miss will be scored. Three misses and the game is over. 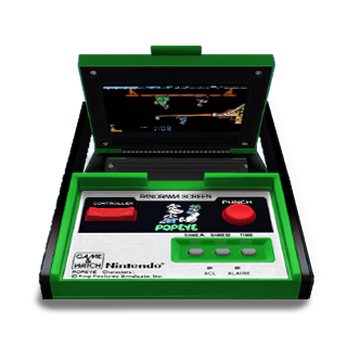