Playable 3D simulation of this   classic handheld electronic game including views of the original packaging and instruction guide
.
A RetroFab simulation
Version 0.9.6

The LCD Solarpower series by Bandai Electronics were handheld electronic games that were powered by solar energy. Games in the Double Panel edition of the series, like Airport Panic released in 1982, featured two LCD panels stacked on top of each other that allowed the games to progress across two distinct stages for more variation in gameplay.

Hijackers have boarded a plane at the airport and taken the passengers hostage. Your mission is to board the plane and take out the hijackers. Gameplay takes place over two stages: 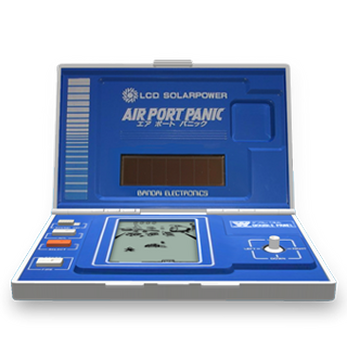